Welcome to the Lady Ryder Memorial Garden situated in a superb rural setting above the renowned Hambledon Valley in the heart of the Chiltern countryside.

We are dedicated to charity work.

Have your ever considered how much difference you can make by working for a voluntary organisation?

The following pages present detailed information about our work and those we help. If you'd like to contribute to our organisation, you can become a volunteer helper.

We welcome visitors to come and see what we have done and are doing. Why not come and enjoy our garden? 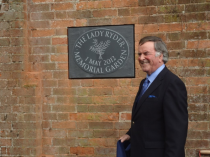 If you're interested in our work and would like to support us, read about us and  the projects we've contributed to in the past.

The Lady Ryder Memorial Garden. Parmoor, near Frieth, Henley on Thames Bucks. RG9 6NN is a walled garden enclosing approximately 1 acre. It was built in the late 19th Century to serve the kitchen of the adjoining house and home with produce.

It was used by the Cripps family until the 1940s. It was then left and ignored.

In 2009 A group of local enthusiasts decided to try and restore it to its former glory. The adjacent family house had become a retreat house and food was needed for the visitors.

In 2010 planning permission was obtained to replace the 5 Glasshouses.

Volunteers were recruited from local organisations including disadvantaged and homeless youth. They began to attend and help restore the garden. As time passed these organisations have provided much needed help in the garden, the YMCA, the Old Tea Warehouse, Green Gym and Watford Hope Trust.

In Summer 2012 Arrangements were made for volunteer gardeners to obtain qualifications from Aylesbury College.

From September 2013 we have been linked with Berkshire College of Agriculture to provide City and Guilds Level 1 in Horticulture.

In 2014 we completed the building of our new Educational facility in the garden. We  begin a new chapter in our story, helpiong those less fortunate than many in our community, including those affected by Drugs, without homes and without employment.

More help is needed to raise funds for the garden.

If you are interested in helping us with this exciting project please ask for further information and e mail anne.parmoor@aol.com.

We are supported by Red Kite Community Housing.

Find out how by contacting us at:

E mail us at anneparmoor@aol.com and come and see what we do.

You may well be surprised by the atmosphere!

New online access!
Thanks for visiting our new website. Browse it to find out more about us and our projects.